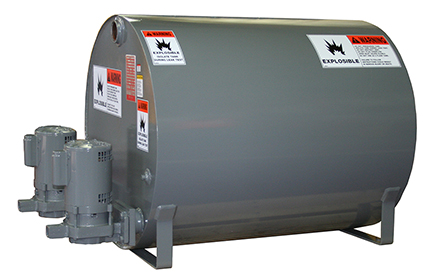 We’ve previously discussed how to size condensate return units. Sizing a boiler feed unit requires similar information but is affected by differences in design and operation.

Boiler feed units are larger, with greater condensate reserves. This fits their function of maintaining the boiler’s water line so steaming can occur even when condensate is not returning. The control that starts and stops the pump is on the boiler.

Understanding the cycle
Just imagine the cycle if you had to rely on the condensate return unit to feed your boiler. The boiler starts, raising condensate temperature to 212 degrees at sea level. Steam generation begins and the water expands, minutely increasing the volume in the boiler. Suddenly the volume expands about 160 times as steam moves from the boiler into the header and system piping. The water level drops as more and more water becomes steam.

We all know that if the water level drops too low and the boiler keeps running, you run out of water—and the low-water cutoff control will engage safely shutting down the burner. But if you have a condensate return unit, and it has not yet collected any condensate, it won’t pump to return water to the boiler. Your choices are to add water directly to the boiler—or to shut off the heat, wait for the condensate to come back, and re-start the boiler. Shutting off the boiler and waiting is uncomfortable when the temperature in the house/apartment/factory is 55 degrees. At a midwinter ten below zero, it’s downright nasty. So you add water to the boiler, make more steam, and eventually everything comes back.

Managing water
About that coming back…What happens when the boiler has made all that steam, put heat in the building and shut down until it’s needed again? The condensate return unit doesn’t care. As soon as its tank fills, the unit triggers the pump to empty the tank—even if the boiler’s not running. All that water you added gets pumped back to the boiler, which promptly floods. A bigger condensate unit tank might take longer to fill, but the pump will still start whenever the tank is full. Enlarging the return unit also means condensate sits there longer, getting cooler and causing the unit to consume more energy. Plus, a bigger unit probably costs more.

Somehow you need to provide water when the boiler needs it, not just when the tank is full, and even when condensate hasn’t completed the cycle of becoming steam, providing heat and turning back into condensate. In other words, you need a boiler feed unit.

You can maintain the water level at the boiler’s optimum water line with a dedicated PUMP control on the boiler. The boiler can then turn the pump on and off based on when the boiler needs water, not just when the collection tank is full.

On to the calculations
Let’s start with the load. Boilers are rated to show how much steam they can put out, expressed as boiler horsepower, pounds per hour of steam, BTUs, etc. It makes sense to convert system numbers to a common denominator. Almost every manufacturer of steam condensate handling equipment uses one of these frameworks for sizing.

When everything is said and done, what comes back from the boiler as condensate is .000496 gpm per 1 sq ft EDR. Rounding off, you can say the boiler puts out one half gallon per minute of water in the form of steam per 1000 sq ft. EDR. When the steam cools and turns back to water, that’s the condensate that can be returned to the boiler feed unit. Here are some of the more common conversion factors:

The discharge pressure required from the feed pump includes the static head lift, plus the friction loss in the piping (including pipe, fittings and valves). Manufacturers and ASHRAE typically recommend that for requirements up to 50 psi, you take the total of these values and add 5 psi. If the total required is more than 50 psi, add 10 psi. This can be a daunting calculation for a condensate return system; you have to determine how much pipe there is, the pipe size, and the number of elbows, unions, etc. Boiler feed systems tend to be simpler, since the unit is generally located near the boiler. But remember that we said with condensate return systems you typically pump to the boiler feed unit which is vented to atmosphere. Discharge pressure required also includes any pressure in the vessel that you’re pumping into. If you’re pumping into the boiler, you have to add the maximum boiler pressure. For example, if the boiler is operating at 5 psi, factor that in—or you end up deadheading the pump against the pressure in the boiler until the boiler pressure falls and the pump can overcome it.

More considerations
All the other things we covered for condensate return units apply here as well.

NPSHA vs. NPSHR. In most systems that have both condensate return and boiler feed units, NPSH is less of a factor for the boiler feed unit, because the feed unit occurs later in the system. Sufficient sub-cooling has occurred, and the NPSHA (available) is sufficient to avoid pump cavitation. However, never presume. Check temperatures / NPSHA to avoid problems later.

Unit sizing. As mentioned earlier, feed units tend to be larger to ensure sufficient reserves for pumping to the boiler as needed, even if steam in the system is not yet re-condensing and returning. Condensate return units are typically sized for one minute net storage. Boiler feed units are generally sized for 5 minutes of net storage. You can feed your boiler for 5 to 10 minutes, depending on the load, to keep it steaming while waiting for condensate to come back. In smaller systems, up to 150,000 sq ft EDR, 5-minute pumping capacity is a good rule of thumb. For systems larger than 150,000 sq ft EDR, 10-minute net storage is better, because steam takes longer to travel through the entire system and return as condensate. Recall that 1 minute net storage is 1 minute based on pumping capacity, which is really twice the steaming rate of the boiler. So in a 15,000 sq ft EDR system, where your pump is sized for 1 gpm per thousand square foot EDR, or 15 gpm, the boiler feed unit tank storage should be 15gpm times 5 minutes, or about 75 gallons of storage.

A word about make-ups
The components of condensate return and boiler feed units are pretty much the same, with one noticeable difference. Almost every boiler feed unit has some sort of make-up. It may be a simple manual fill valve or float-operated mechanical fill valve. Other models use solenoid valves controlled by float switches, admitting water when the feed unit pumps to a predetermined
point of insufficient reserves. Some suppliers furnish their boilers with combination low-water cutoff / feed devices that can add make-up water to a boiler, although all you need to protect the boiler is a lowwater cutoff.

You can actually make a case against adding make-up directly to the boiler. Untreated “city” water can cause scaling and other problems in the boiler and the rest of the system. What’s more, injecting cold make-up water into the boiler generally stops the steaming process. On the other hand, adding make-up water to the feed unit tank lets you add a bit of cold water to a larger volume of hot system condensate. This creates condensate in the feed unit with a higher blended temperature and requires smaller amounts of water treatment, as the addition mixes with already-treated condensate.

A couple final points about sizing boiler feed units: The pumps are sized the same as for condensate return units, one gpm per thousand sq ft EDR. The tanks (receivers) are sized for 5- to 10- minute net storage (depending on the size of the system).

Connecting to your BMS
Why Choose a Hoffman F&T Trap?
Steam Vapor/Vacuum Systems